Elara’s founder, Chuck Weger, has been active in computers and computer graphics for decades, having programmed systems from IBM mainframes to UNIX workstations to embedded microprocessor controllers and, of course, modern Windows, Macintosh, and Linux systems.

Early in his career, Chuck worked (via contractors) for NASA at the Goddard Institute for Space Studies in New York City and the Goddard Spaceflight Center in Greenbelt, Maryland. He left the GSFC job to spend time doing child care for his then six-month old daughter, and started his first consulting work then.

Chuck moved away from consulting more than five years ago to take a job as Chief Technology Officer for Appo Group, Inc. In this position, he was responsible for architecting and creating a complex web-to-print-and-web system for the retirement communications industry (i.e. the people who send you your 401K brochures). That system was used by one of the largest retirement management companies in the US.

More recently, Chuck took a position as Chief Technology Officer at Barebones Living, a manufacturer and online retailer of boutique outdoor dining, gardening, and camping equipment. In this position, he transitioned the company from a small hand-crafted (and expensive!) website to a site powered by Shopify, a leading e-commerce platform. He wrote software that integrated Shopify with the in-house accounting system, as well as with a third-party logistics (warehousing and shipping) company.

But now he’s back, and ready to help you with your project.

As a consultant, Chuck wears many hats, including Business Analyst, Systems Architect, Lead Developer, Database Administrator, DevOps Technical Writer, and Beta Tester. He interfaces well with the most technical developers as well as completely naive business management and end users. Chuck is a dynamic speaker and writer, and has chaired sessions at many industry conferences over the years. He currently chairs the Adobe Creative Developers Summits at the Creative Pro conferences (next one is in Austin, TX, in June 2020).

Chuck was a contributing editor for the late, great MacUser magazine, and a writer for several other industry publications.

In his spare time, Chuck plays with his grandchildren, his collection of Raspberry Pi and Arduino microcomputers, his musical instruments (including a Theremin, an Ocean Harp, and several types of Nose Flutes), not necessarily in that order. Chuck also sings with a semi-classical Seattle chorus called “Choir of the Sound” (which seems redundant, as aren’t all choirs “of the sound”? It’s not like there are choirs “of the smell” or anything like that), 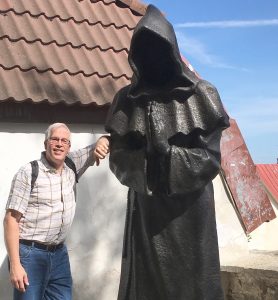